GATT Dispute Settlement Reports compiles all dispute settlement reports issued under the General Agreement on Tariffs and Trade (GATT 1947), including its Tokyo Round plurilateral codes, from 1948 to 1995. This compilation includes both adopted and unadopted reports. The GATT documents containing the reports are reproduced in English in their original form and without any modifications. They are presented in chronological order based on the initiation date of the dispute, with each case identified by a unique GATT dispute (GD) number. A cover page for each dispute provides the report's adoption status, the date it was issued and any GATT or WTO disputes directly related to the dispute in question. At the end of each volume, there is a list of all GATT dispute settlement reports contained within the series, with references to the relevant volume and page numbers. 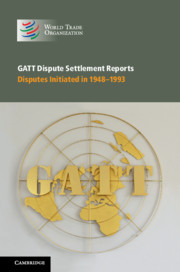